Where is all you angels

Now the figureheads have fell? 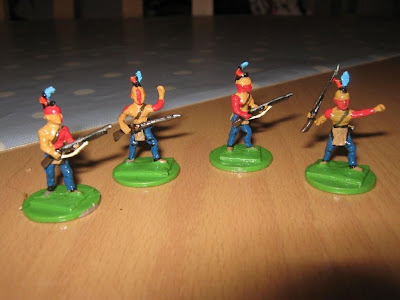 You're probably wondering what the splendid, if semi-literate lyrics of New Romantic yacht-sailing fops Duran Duran and a load of S Range Woodland Indians have to do with Ancient Wargaming.  The rather eliptical answer is to be found in the film The Eagle (which I watched again last night - and damned wonderful it is too, from the scythed chariot of the wild-eyed druid to English actor Mark Strong's excellent decsion to affect a New York accent to play a Celtic Roman legionary).

The film's star turns are the "Warriors of  The Seal People". These blue-faced, fur clad, Mohican sporting, tooth-necklaced bedecked young chaps always put me in mind of the Wild Boys from the Duran Duran video (Though the chief looks more like a drug-addled escapee from Trainspotting)

Leaving aside the Vivienne Westwood/ Irvine Welsh touches, the other thing that is plain to see is that The Seal People owe quite a debt to the Iroquois and other North American Woodland Indians. The figures above might easily be converted into Seal People. And don't think I'm not tempted.
Posted by camsell59 at 00:40