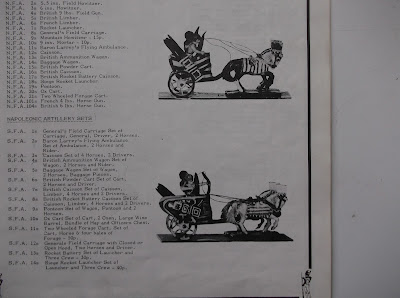 Yesterday I claimed that the only S range ancient figures I'd never seen were a few coded A2s. Looking at that old catalogue again, however I realise that couple of the chariots have so far dodged my attention - the Egyptian light chariot ( the top vehicle in photo one, above) and the Persian Bactrian vehicle which I'm guessing is the middle chariot in photo two (Below). I'm thinking that the Egyptian chariot is actually a remodel of the one I use in my Egyptian army, the Bactrian vehicle is a mystery, however. It seems to have some sort of external lattice-work on the body and feature a converted Assyrian javelinman as a driver. I've got a quite a few chariots in my collection - including the heavier Egyptian version with pharaoh in it, but I've never clapped eyes on the Bactrian cart. 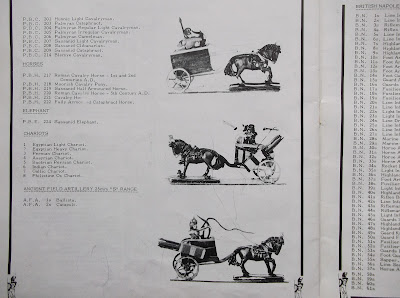 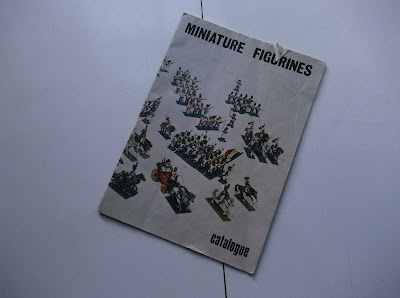 I must have spent a large chunk of 1973 studying the above Minifigs catalogue - well it either that or phsyics homework. I guess I must have got a copy during a foray to The Stamp Shop in Middlesbrough. My focus was the colonial section. Eventually after much deliberation I handed my mother a chunk of cash in return for a cheque and posted off an order for 50 S range zulus. About a month later the cheque was returned with a curt note telling me that the figures I had ordered had now been discontinued. No further explanation was forthcoming. S range had gone for ever. The era of the chunky monkeys was upon us.

Back then I wouldn't have been much delayed by the ancient section of the Minifigs catalogue. The only ancient gaming I did in those days was with a friend of mine and his younger brother who had aquired an odd assortment of 15mm Chinese and - if memory serves - Khmer from Peter Laing. Tiny, lumpy little things they were. And the figures were a bit odd too.

Anyway, I have more than made up for that oversight since. At some point on this blog I mentioned that one of the few S range ancients I have never seen is AA2s - Assyrian standard bearer. Oddly enough the only others I haven't seen are also A2s figures - AP2s (Persians standard bearer), AE2s (Egyptian standard bearer) and AS2s (Sassanid levy archer). Apart from that I've clocked all of them, even the Philistine ox chariot and the off-the-wall Gaul or Hun mounted archer.

It's odd that the standard bearers are the figures nobody seems to have bought as they usually rank high on any wargamer's shopping list. I wonder what happened to them all? 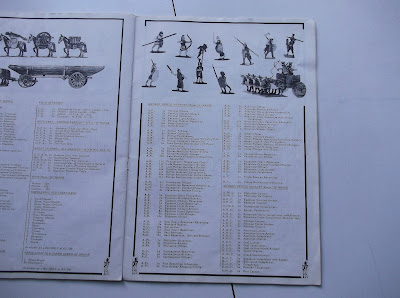